The RCCPII Capacity Development Initiative reached 775 individuals from 25 out of 26 publicly funded universities as well as several research institutions and councils.

At the start of the RCCPII Capacity Development Inititive in January 2019, the project team developed a Theory of Change Model to plan specific interventions. The aim was to provide capacity development opportunities for the following categories of people:

We also aimed to provide a large number of opportunities for these groups of people to attend RCCPII activities together to learn about each others’ worlds and build bridges between support and end users.

The RCCPII Capacity Development Initiative hosted 47 activities in 15 months. The programme included 21 online and 25 in-person activities and reached 775 individuals. Since several participants joined more than one activity a total of 1,180 participants took part across the full programme.

The map below shows the spread of activities across South Africa. 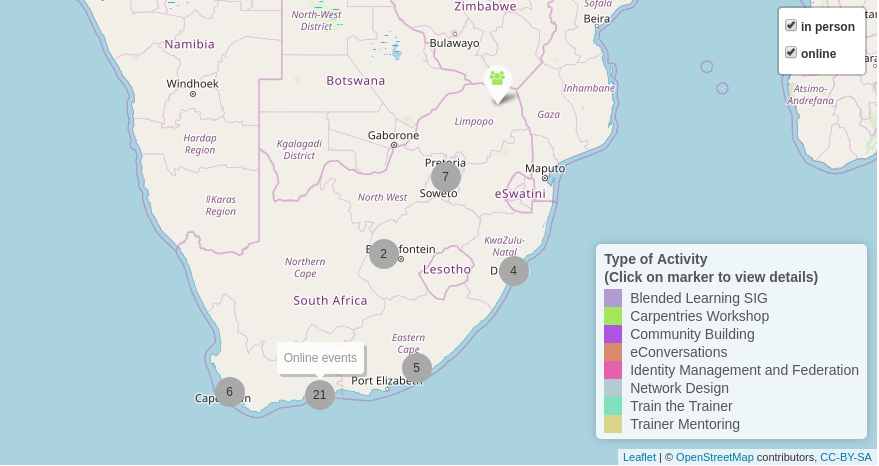 Other publicly funded institutions also benefited from the programme, including research councils and research organisations.

As mentioned above, the RCCPII capacity development initiative reached 775 individuals with several participants taking part in more than one activity. Over the 15 months we had 81 people acting as instructors and 30 acting as helpers. Some people instructed several times.

The plot below (downloaded from the RCCPII Shiny App) shows the diversity in participants’ disciplines as well as their job role at the time of the activity. 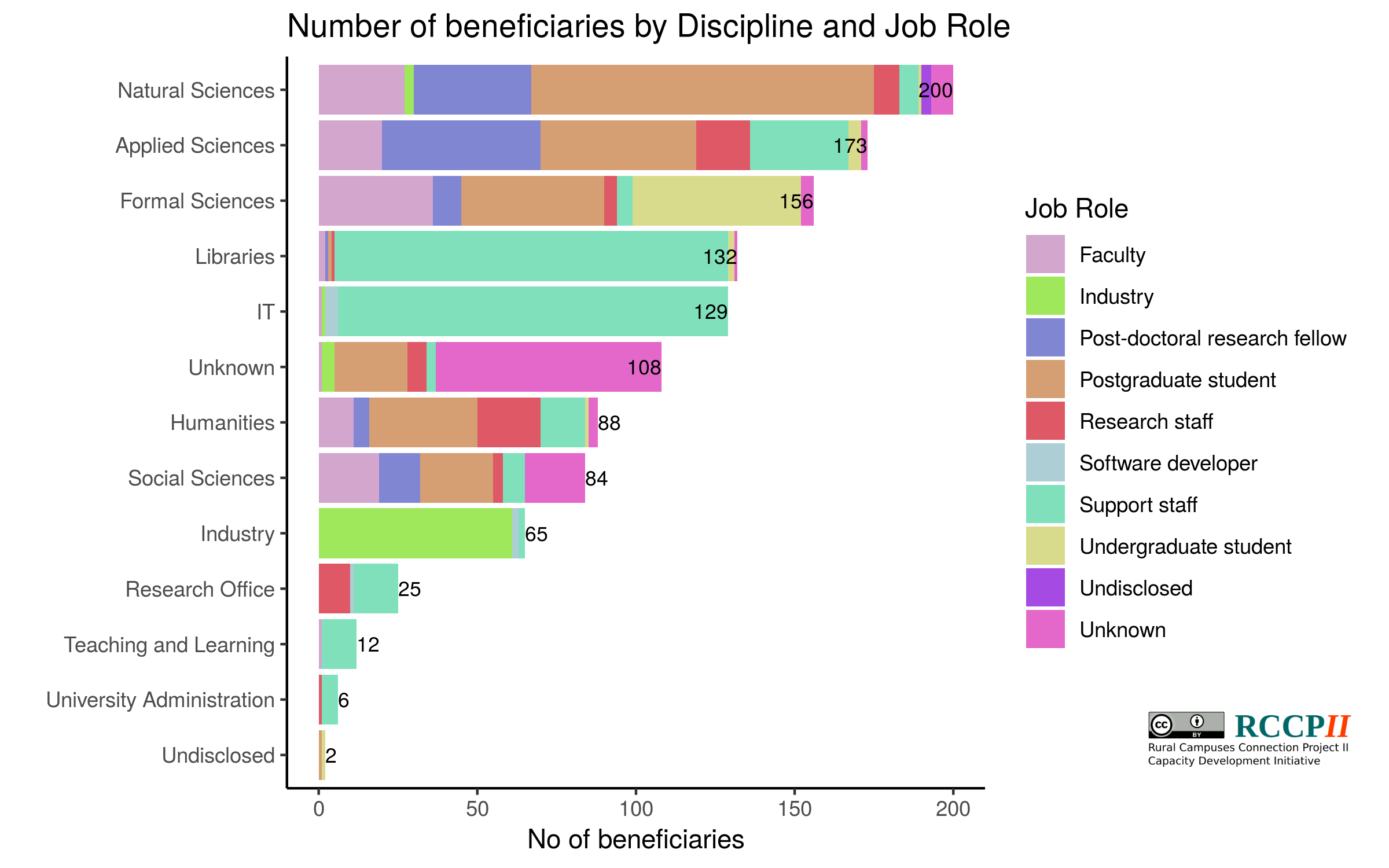 The RCCPII capacity development initiative team set out from the start, with the vision of making the activities accessible to the broadest possible contingent of South African students (mostly targeting postgraduate students), academics, and support staff. The plot below shows the diversity that was achieved in terms of race and gender. 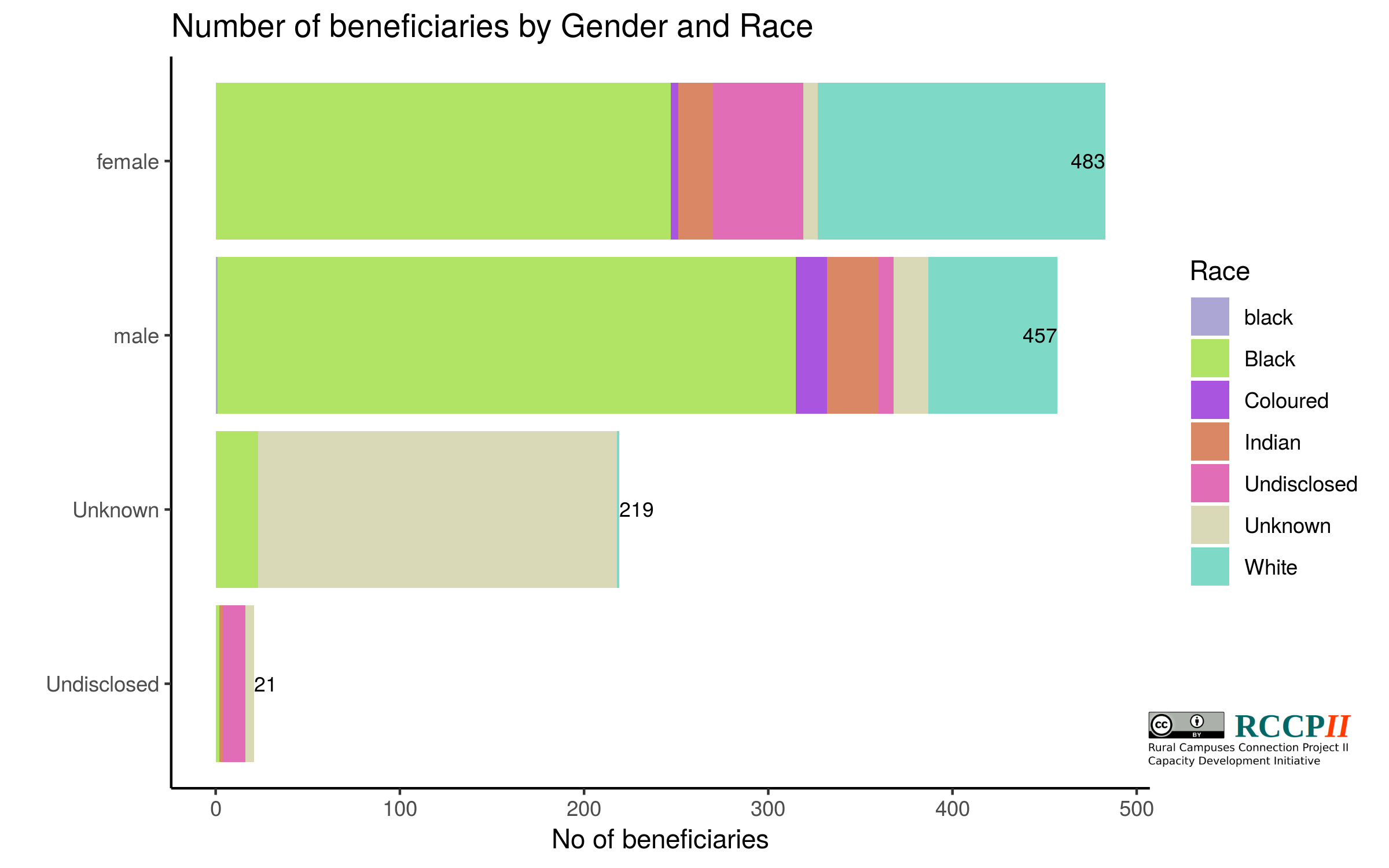 Relevance of content: The Carpentries workshops as case study

We would like to specifically highlight contents and outcomes of Carpentries workshops since it is still not a well-known capacity development ‘tool’ in various regions in South Africa.

During the Carpentries workshops the following topics were covered:

The tools that were covered included:

It is important to note that all these tools are available for free (no license cost) to anyone in the world. This means that all participants could take what they’ve learned back to their work or home and continue to learn/do with no additional barriers of license costs. All the tools can also be implemented on any operating system on most laptops/desktops.

In RCCPII capacity development initiative we used the tools we teach: